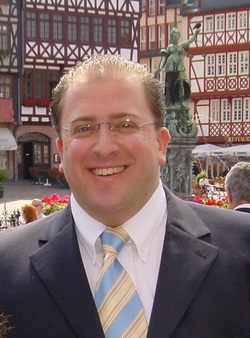 Sacha Stawski is the president and editor-in-chief of Honestly Concerned e.V. (www.honestlyconcerned.info), an initiative which was founded in May 2002 to fight unbiased media coverage of theMiddle East conflict and anti-Semitism. In this regards Honestly Concerned publishes comprehensive daily, as well as weekly press reviews, in addition to organizing letter writing campaigns, political debates, demonstrations and more. Besides that, Sacha is a commercial property manager. He has a „BA“ (Bachelor of Arts) in Economics from Clark University and an „MBA“ (Master of Business Administration) from the University of Chicago. In November 2009 Sacha also became the president of "ILI - I LIKE ISRAEL e.V." (www.il-israel.org), which organizes an annual Israel day acrossGermany and in an increasing number of cities worldwide. In this function, Sacha also became the organizer and host of the largest ever cross-organizational Israel solidarity conference in Germany, which first took place in 2010 (www.Israelkongress.de).
The last conference in October 2011 was supported by over 180 organizations, with over 3,000 attendees. (The next congress is schedules for 2013.) Additionally, Sacha was a founding member of the Coordination Council of German NGOs against anti-Semitism and he is a member of a number of international networks, which deal with combating anti-Semitism and the delegitimization of the State of Israel. Besides various Honestly Concerned publications dealing with questions in regards to anti-Semitism and the Middle-East, Sacha Stawski is the co-publisher and co-author of a book on the “new anti-Semitism”, entitled „Neu-alter Judenhass - Antisemitismus, arabisch-israelischer Konflikt und europäische Politik“ (Berlin: Verlag Berlin-Brandenburg, 2006, 2. Aufl. 2007, Klaus Faber, Julius H. Schoeps and Sacha Stawski). He is also co-author of a book a book on Jews and the military in Germany, entitled „Juden und Militär in Deutschland" (Berger/Römer-Hillebrecht (Hrsg.), 2009). An essay on the role of the media in the fight again anti-Semitism, published in the book “What I always wanted to tell the Jews… (“Was ich den Juden schon immer mal sagen wollte...”, Weissberg-Bob, Lichtig Verlag, 2002).